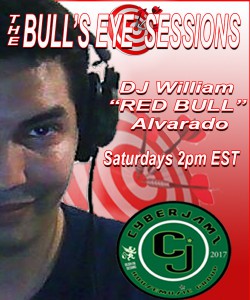 Cyberjamz Radio welcomes William The RedBull Alvarado to our Saturday line up ! Catch him from 2 – 4pm est at Cyberjamz Radio – https://cyberjamz.com

William “The RedBull” Alvarado was born in the South Bronx and raised in Manhattan in New York City. His parents and grandparents were involved in creating music covering many different genres and were responsible for inspiring William to follow in the same footsteps. At the early age of 16, he became intrigued by the sounds of the underground known as house music. In 1989 Williams’s first club experiences started with the Legendary Club Zanzibar in New Jersey and that was the moment that caught his attraction to house music and at that point, I wanted to be involved with this beautiful style of music. This fascinating movement got him to support and promote it and he also decided to invest his time and money on DJ equipment.

At the present time William “The Bull” Alvarado can be heard at the award-winning Cyberjamz Internet Radio every Saturday from 2pm to 4pm eastern standard time. If time allows, please catch the archives of my current shows, you won’t be disappointed. Stay tuned for more upcoming developments.