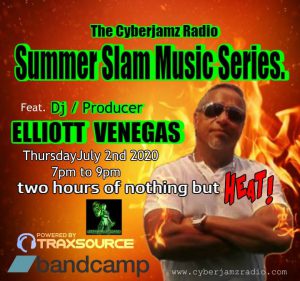 What a hot show this was featuring deejay – producer DJEV – Elliott Venegas. This set is filled with jams out on Cyberjamz,Toupee and DeeperSIDE of Cyberjamz. There are also quite a few killer tracks not out on the labels. Download this set and rock it out!

*no playlist at the time of airing.

*Pick up all of the DJEV exclusive tracks not out on the labels on his Bandcamp page https://elliottvenegas.bandcamp.com/

DJ/Producer Remixer Elliott Venegas aka DJEV has been in the business for over 40 years. He was born in 1963 in Brooklyn NY and was brought up during the time when disco was at its best. Elliott was raised in a Latin / Disco family surrounded by his older sisters who were true Disco Divas, with such inspirational influences, Elliott was destined to reside with music forever.

While barely a teenager, his brother-in-law introduced him to turntables, sparking his interest in spinning. Early on, Elliott was inspired by “92 KTU’s” Ted Currier concept of blending music. Ever since then, he has been perfecting his technique, developing his own unique and dance-oriented style while collecting the hottest of current house music.

Elliott’s passion for the music matched that of the crowd’s during the peak of the New York underground. During this legendary time, there were many opportunities for Elliott as he played in venues that have made major contributions to the nightlife scene around the world. Starting in 1977, Elliott played regularly to enthusiastic crowds at house parties, and collaborated with several friends as “The party doctors”. In 1981 he performed for his first club audience at “one’s 111 discos where he continued as the Thursday night resident DJ with Dennis Gregory, this lasted for three years. He was a guest DJ at Roseland, Zanzibar, Studio 54, Ipanema, and the Ozone Layer where he played alongside David Morales and Kenny Carpenter. He was also regular at the Paradise Garage, The Loft, and Bond’s International.

Elliott was always absorbing what was new and hot while paying attention to the crowd’s wishes and responses. While working at Dance Tracks, starting in 1999, he was able to use his expertise in the field of music in sales. He was head of the mail order department and began advising the international clientele on the most current tracks.

DJEV – Group Page on Facebook -DJEV Positive House Movement
www.facebook.com/groups/795484070462618/
and you can find some of his dope mix sets on https://www.mixcloud.com/elliottvenegas/

Elliott Venegas continues to make guest appearances at some of the hottest parties in NY, NJ, and VA. Elliott’s main focus has shifted to production. He has worked closely with Willie Washington, Jovonn at the next move, and John Cutler of Distant Music, Louie Vega, and so many others.

So what about the future for DJ Elliott Venegas, well for now he is focusing on production. After spinning for so many floor fillers, he released tracks of his own. He has put out club bangers in collaborations with music producer Jovonn such as “THE PRAISE EP”, NO MATTER WHAT, AFRO GROOVE on Westend Records and “THE RHYTHM” with Ariel “lights” Figueroa on Wave Records with Francois K., the Italian International record label LadyMarySounds Records and his
track is featured on the LadyMarySounds 1st Anniversary Collection – a remix on Afrihouse Rhythm Staircase Djev Dark Mix and his own E.P. “It’s All About The House Music”, Soul Shift Music” Record label and put out “THE UNITY HOUSE E.P. Vol.1 And now has joined forces with Cyberjamz/Toupee Records, putting out smash hits such as Olle Mami, Amame (Just A Touch), Live 2gether, Ever Since, Me Voy Del Campo, This Is That Feeling, Mi Corazon, and so many more. Also rocking the Afro/Latin/Brazilian Charts and making the top 200 for the year on traxsource.com 2018/2019.
you can find all of Dj/Producer Elliott Venegas Music on: https://www.traxsource.com/search?term=elliott+venegas