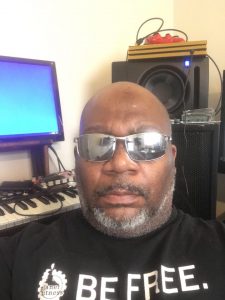 It’s THUMP-DAY THURSDAY and yall know what that means… its time for the Cyberjamz Radio Summer Slam Music Series feat Cyberjanmz – Toupee – deeperSIDE of Cyberjamz Recs own deejay/producer on dex from 10am – 12pm est USA TIME.

He has been Djing in Baltimore MD and surrounding areas for the past 33 years. Dj Wm J was a resident at Dj inside The Baltimore Oak Tree. He has also played music at Volcanos , Foxes Den, and Shake & Bake to name a few. Dj Wm j is now strickly a mobile Dj. He hopes of playing music overseas in Japan, Spain, Germany, and South Africa. Though Dj Wm J is a well diverse Dj, He has also adopted a strong passion for house music. William Curtis grew up listening to other music programmers such as Dj Spen, Thommy Davis, Teddy Douglas, and Wayne Davis just to name a few however the one Dj that made a huge impact on his life as a deejay and is partly responsible in WM J becoming a house music Dj is Dj John Johnson.

John johnson encouraged William to wanna learn about the craft and genre. Dj Wm J was also introduced to deejay Sw3 and Dj Pistol Pete who also played a major role in becoming a music producer and because of the guidance of these two individuals,he is now fully invested in his own music works.

Thanks to Dj John Johnson, Dj Sw3, and Dj Pistol Pete, who made Willaim DjWMJ the producer he is today.