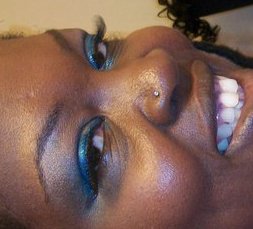 Cyberjamz Records is proud to introduce Seductive Sapphire to our label and she is the Spoken – Word Artist Pick of the Week.

Seductive Sapphire has been on a mission with our label in performing a few dance floor pieces entitled “When the Beat Drops”,”Chocolate Melts” and the upcoming “Simon Say’s”.Sapphire also has some hot producers on her side remixing these wonderful packages.

Sheila C. Johnson was born Sheila Anne Bailey aka Seductive Sapphire My biological dad George Bailey….Jamacian from Kingston and my mom Cherokee, Hopee and Blackfoot Indian and African American and from North Carolina. I was adopted by Colston & Bessie Washington at the age of 2. Quickly my adoptive mother noticed my dancing talent at the age of 2 years of age so at the age of 5 she sent me to Marie Wiley School of Dance Located in East Orange, NJ. As years pass on I became good at dancing to any genre of music. In 1979 my brother Stephen C. Washington formed his group Slave & Aurra, and he always had me with him in the studio which was named The House of Music, which was located in West Orange, NJ. I began to know music and know how to learn different types of music. I even at that time knew how to read it as well. Now let me bring you up to speed about me, I began writing poetry as a way to express myself at the age of 12, as I became a young women then I began going to clubs to dance, and I could never get enough of it. If there was a party I was at it if I could be there.

Years later I became apart of Roxy Music founded by Charles Mc Dougald and was introduced by him to many Dj’s on another cite Stickam.com which is no longer online. After meeting Kristine J who is a comedian on that site she interviewed me, and from that interview I meet Tim Wayne, Diamond Dee, Stanstrong, Johnny Dangerous aka foremost Poets, Lucky Benson (George Benson’s son). When tim Wayne came over to cyberjamz I went over to that site to listen to him play and I meet more DJ’s and programmers and producers as well.

One day I was speaking to Sammy Rock aka Soul Oasis and told him I wrote spokenword so he said  and I quote” send it to me” so he gave me his email and I did. And then the rest is history! Sammy Rock gave me a chance to show my talent that my dear departed mother told me a year before she passed that I would do something great with my talents. boy was she right I became a Artist, now a DJ’s apprentice as well. I would like to thank Sammy Rock, Catherine Rowell Harris, Charles Mc Dougald, Kristen J, and Diamond Dee, Michael Menton, Mark Mendoza for saying lolol you would be good DJ and Hutch Hutcheson for saying you will be doing music and I said nope well you See God had other plans! Thanks to all my Cyberjamz family for noticing my talents! And know that without God giving you to see the vision of what I could become and I humbly appreciate it with all my heart! Many thanks to my children India A. Washington, and Alexa Z. Johnson and my beautiful granddaughter whom insipires me Nalani A. Washington to keep doing what I do!