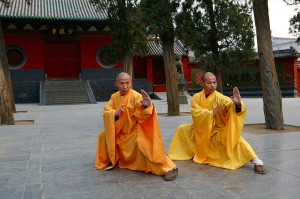 Monkey Kung Fu, or Monkey Fist (猴拳), is a Chinese martial art that utilizes ape or monkey-like movements as part of its technique.

There are a number of independently developed systems of monkey kung fu. Examples include Xingzhemen (行者門) named after the protagonist Sun Wukong of the popular Ming dynasty novel Journey to the West, Nanhouquan (南猴拳) or Southern Monkey Fist originating from the Southern Shaolin Temple as well as the better-known Da Sheng Pi Gua Men 大聖劈掛門 style of Hong Kong.

Drunken Monkey Form or Drunken Monkey Pole Form of Kung Fu is a Chinese martial art and one of the variations of the Monkey Style.

This style is different from Zui Quan (Drunken Fist), as the practitioner is imitating gestures of an intoxicated monkey, rather than a human fighter.

Drunken Monkey does not begin with drunken-like gestures, but rather the drunken aspect enters the forms in the middle section when the practitioner plays the movements of a monkey drinking stole wine(in my case Patron – Tequilla).

The Drunken Monkey style is visually completely different when compared to Zui Quan and is shorter in sequence. This style, however, is considered more artistically beautiful, acrobatic and agile compared to Zui Quan[citation needed]. This does not necessarily mean that it is more or less effective in actual combat.

he forms is short and simple, consisting of a few dozen or so movements. Much of the moves are performed at a low ground level, with rolling, tumbling and falling techniques. There are also many unusual grappling and blocking techniques. The higher level attacks include eye pokes and throat hits, as well as blocks and punches (with punching being exceptional, as monkeys generally do not attack with their fists). There are also many middle attacks such as kicks aimed to the stomach area, and lower attacks to the lower abdomen, groin and legs.

The “Monkey-Hands” Technique: Relaxed hand strikes with the palm facing downward and fingers drooping towards the ground, used to deflect hand strikes and kicks, and also to strike with the fingers towards the throat and eyes.
The “Monkey-Claws” Technique: This attack is basically a strike with the palm facing forward and hitting with the fingers and striking downward, like any animal’s clawing motion. It is used to hit the face and eyes, and can also be used to grapple the opponent’s wrist.
Low Kicks and Ground Kicks: There are many kicks in Drunken Monkey, primarily aimed at the lower portions of the body (legs, groin, abdomen) and executed from a low position or from lying on the ground.

**ALL OF WHICH BE DONE in the MIXING MUSIC TECHNIQUE** 🙂