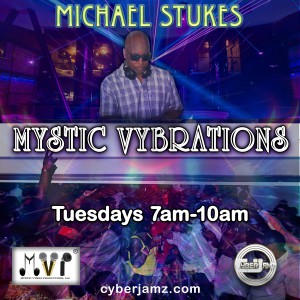 Cyberjamz Internet Radio with Michael Stukes – Mystic Vybrations go down every Turn it up Tuesday from 7am – 10am est Check-in nice and early for your morning house music fix!

While working at HMV Michael met DJ True, host of “Deeper than Disco” at radio station WHCR, 90.3 FM, located at CCNY, NYC. This connection eventually led to Michael’s own show, in April of 2006, Mystic Vybes, which currently airs every Thursday from 3am to 6am. Michael has traveled both stateside and abroad for various DJ gigs and events.

His endeavors for the future will include producing music for movies and scores, commercials, current, and future artists as well as engineering for stage, concerts and large venues. Michael’s favorite quote is “PPP- (Patience, Persistence, and Perseverance) ALWAYS pays off.