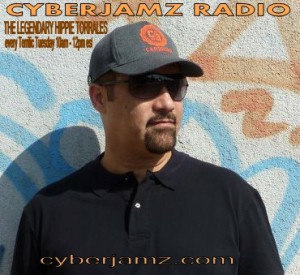 The Legendary Hippie Torrales pres.”What is Hip” Tuesday’s 10am – 1pm est.This show has been on Cyberjamz Internet Radio for the past 10 + years !!

Hippie Torrales began DJing at the age of 15. He came into recognition in NJ and NY after opening “Docks” with co-partner Nelson “Butchie” Nieves. After establishing himself as an innovative and creative jock, Hippie was recognized and hired to work at Abe’s Disco, which was the forerunner for Club Zanzibar. On Friday, August 29, 1979, opening night at Club Zanzibar – Hippie became the resident DJ and opening jock for the club.During his tenure at Club Zanzibar, Hippie won the prestigious Billboard Disco Forum 8 Award for the best disc jockey in the State of New Jersey – in the same year Larry Levan won the award for New York. It was the last time those Billboard Awards were held. After his resident at Club Zanzibar, Hippie went on to play all the Jersey Shore night clubs. In addition to the club gigs, Hippie worked on music production and remixing. Some of his most notable mixes of that period were Jimmy Ross’ – “Fall Into A Trance” and The Clark Sister’s – “You Brought The Sunshine”, which garnered them a 1 record of New York’s local radio station WBLS and also garnered them a Grammy nomination that year for Best Gospel.

In 1988, Hippie was approached by local record store owner, Joe Rodriguez from Music Village Records and asked Hippie to produce his own record. Hippie thought about the opportunity and went home, borrowed equipment from a friend and began working on his very first original production. He wrote, performed and produced “You’re Gonna Miss Me” by The Turntable Orchestra, which became a club classic in Europe and has sold over 2 million copies. It was from this moment on that Hippie began traveling overseas and DJing at international clubs and began writing a music column for Discoid Magazine, which was called “What Is Hip.”
Hippie’s remixing career took off when he partnered with Mark Mendoza and created MenTor Productions. They did numerous remixes which included such artists as Lisa Stansfield, Evelyn King, D’Lacy, and most notable Rosie Gaines. In 1997, Hippie and Mark produced Rosie Gaines’ – “Closer Than Close”, which went top 5 in the British Pop Charts and has sold over 8 million units worldwide.
To date, Hippie continues to DJ overseas and currently does an internet radio show on Tuesdays, on cyberjamz.com. He now lives in South Carolina and has recently collaborated on his new album with Jose Burgos and Jerrell Battle called Always released in 2009. His new single called Never Quite The Same by Hippie Torrales feat Rosie Gaines was released in September of 2010 on MN2S. Which went to number 1 on Traxsource Top 10. And another single called Wastelands by Hippie Torrales & (George Mena- RIP) present Robin Reed was also released in 2010 on Universe Media. In 2011 Hippie started his new label Called What Is Hip and has so far released two singles. First being called If You Need A Man in which Hippie was the featured vocal artist. In the same year Hippie released a second single called You’re For Me by Hippie Torrales ft. Steve Luxe. Currently Hippie has remixed singles for such artist as Roland Clark, Sunlightsquare, DJ Pope and Dolls Combers.
Hippie Torrales also host a weekly mixshow entitled “What is Hip” at the award winning Cyberjamz Internet Radio https://cyberjamz.com  every Tuesday from 10am – 1pm est.
He is still very active in all aspects of music.