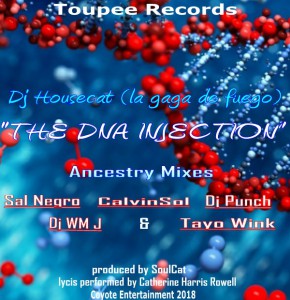 **This release was done for the apple of my eye and partner Dj Housecat(la gata de fuego). It is a surprise for her and this is the first time we are letting the CAT out the bag. It all started out with a piece she sent and it inspired me and our producers so much that we just had to add music to it. The DNA Injection was also inspired by and event that Dj Dee Clark delivers to dancers in the DC/Maryland area of the USA.All the music are super dope and as they say the rest is now about to make HERstory !

Ok now..What can I say about this.jam?.. well let me try. First and foremost what stands out about this dope release is the sensual vocals by our very own Catherine Harris Rowell (DjHousecat(la gata de fuego).. she totally rocked it on the sexy tip ! So let us go through the mixes we have so far for Part One of Two. (More mixes are expected for both packages by our Cyberjamz All-Star Crew of producers.

First up with our new and upcoming producer Calvin Sol who drops a serious deep afro cut without loosing it’s soulful side of things and a funky downtempo version that is simply fantastic! following these mixes is my brother from another mother New Jersey’s Finest Dj Punch.His Remix which is an 80’s flava rendition of “Love Dancin” is filled with signature Punch sounds that stands out. Next up we have the fantastic jackin house remix by William Curtis ( Dj WM J ) ,for those that know about this fantastic producer know this one is flava ! Tayo Wink (B Soul Slayer of the Soul Slayerz) version is supa hot and made for the dance floors,meanwhile Sal Negro’s Mix is out of this world as afro beats and soul with a lovely melody adds a different dimension to this already banging track.