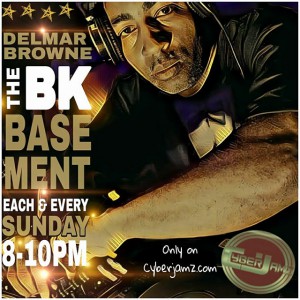 Since the start of his DJ and production career beside his father Al Browne at the tender age of 13 way back in 1976, Delmar has not looked back.Whether he is producing, arranging, coordinating or spinning his volume of depth, Delmar is never far from epic melodies or beats.

· An induction into the Official Disco DJ Hall of Fame™ of the Disco Step-By-Step® Website in 2000.

· Being named “Celebrated Mix Master” for the KTU Studio 54 Clubhouse with “Brooklyn’s own Joe Causi.”

· Named as One of 100 Best Deejays in the Disco Era; Also, through an induction into the Discotheque Pioneers Hall of Fame.

Delmar’s weekly internet broadcast of “The BK Basement with Delmar Browne” has been widely acclaimed and helped him set up a worldwide following. Delmar’s positive, passion for music and life makes him the ideal DJ and host for any party, large or small; Also, coordinator and producer for any musical project.