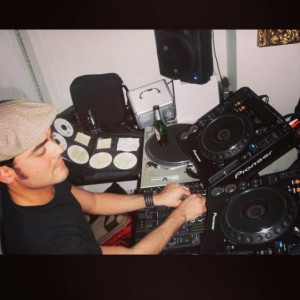 Cyberjamz Records is proud to introduce Mr.Mama aka Maminstrumental out of Italy.This fantastic producer is not new to our music and has been releasing some wonderful pieces on Cyberjamz Records and other labels for quite some time now.His latest offerings out on the label proves that his ear for quality music and production is right on point.

Mauro Marrazza aka Mr.Mama, begins its career of Dj in 1993 when He acquires the first single ones on vinyl.

At first to propose music to people it seems much strange one, but its strong conviction starts it subsequently, also thanks to the aid of some its friends, to the conduction of a issuing program near a wireless one: STUDIO 100 FM. This experience is fundamental for its career that offers the possibility to it to diffuse its music through the radio and therefore it is introduced from some persons wider. In the 1994/95 it collaborates with some Dance Clubs likes : EL COTO CLUB , ONYX CLUB , METROPOLIS for a after tea, EL MAMBO CLUB and at TRIOS CLUB. In 1998 it opens a parenthesis of the duration very 3 years near the SYSTEM CLUB, subsequently with SYLVER SYSTEM,where he play his music with artists of heavy caliber like Tony Humpries, Terry Hunter, Seamus Haji, Dimitri from Paris and many more. In 2003 it begins plan GARAGEFAMILY,with his friend Mario Pagliari , playing in several clubs of Italy.

Another track on Luis benedetti’s Label, SOULSHINE RECORDS with an hot remix for ARNAUD D from france and workin for some hot productions and remixes.

Latest new Release is out now on Cyberjamz Records (Tampa, Florida) and its titled Mondonuovo Ep, 5 Dancemusic Tracks dedicated in hopes of helping our family in Haiti.100% of proceeds go towards Haiti Disaster Releif and on th

Release is out now on Cyberjamz Records (Tampa, Florida) and its titled Mondonuovo Ep, 5 Dancemusic Tracks dedicated in hopes of helping our family in Haiti.100% of proceeds go towards Haiti Disaster Releif and on the same label with label C.E.O  Sammy Rock.

I have an additional 3 E.P’s out on Cyberjamz Records of which are some of my favorite productions and showcases my musical talents.I also have been involved and featured on this wonderful label featuring some of lovely Cyberjamz  spoken-word artist such as RescuePoetix™ ,Sugah Lyrics,Camille Veronica,producer Tayo Wink  and more.

Pick up all of my Cyberjamz Records releases at:

Thanks for the love and support,